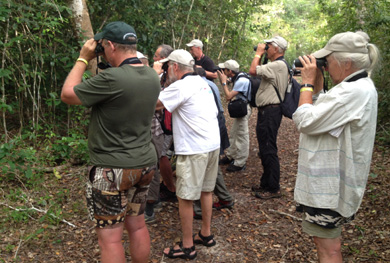 All about the 18 Days Kenya Birding Safari Expedition November.

It is not easy to describe Kenya in just a few words, but it would be fair to say that it is one of the most superb birding destinations in the world. Add the huge numbers and variety of mammals and the large diversity of scenery and you really do have the ingredients for a wonderful experience. This tour has been arranged to visit some of the best birding sites in the country and to see as many bird species as possible. 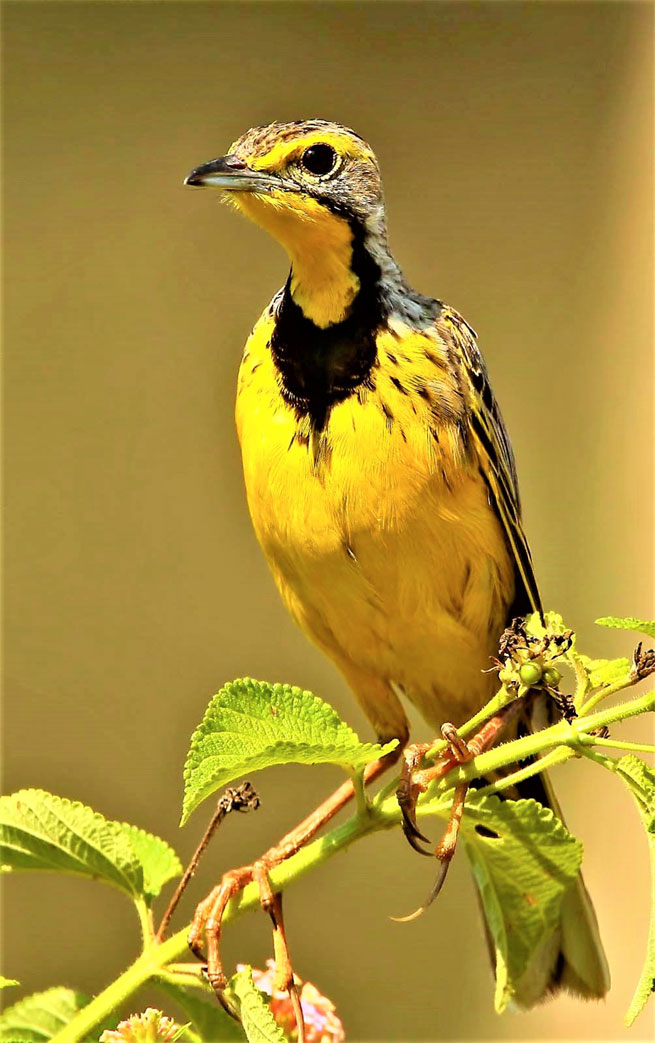 Departure from Europe destination for overnight flight to Nairobi (flight ticket not Included in Our price).

Morning arrival in Nairobi and transfer to  Castle forest Lodge, with several short stops en route. Our first destination is the Blue Post Hotel in Thika, where we will bird the hotel grounds and woodlands along the Chania River. Here we will start seeing our first exciting African species, which may include Hadada Ibis, Red-eyed Dove, African Green-pigeon, Speckled Mousebird, Cinnamon-chested Bee-eater, Silvery-cheeked Hornbill, White-headed and Spot-flanked Barbets, Yellow-rumped Tinkerbird, Mountain Wagtail, Grey-olive Greenbul, Black-throated Wattle-eye, Grey-capped Warbler, Variable, Collared and Scarlet-chested Sunbirds, Holub’s Golden-weaver, Baglafecht Weaver and African Citril. Our second stop will be at the large Tana River, where we should find Moustached Grass-warbler, African Golden-weaver, Yellow Bishop, and Brown-backed and Bronze Mannikins. We will also make a stop at Wajee Camp, a noted site for the endemic Hinde’s Pied-babbler. While birding the steep forested slopes of the camp, we stand a chance of locating Ayre’s Hawk-eagle, African Wood-owl, Brown-hooded Kingfisher, and Green-headed Sunbird. Castle Forest Lodge is located on the Eastern lower slopes of Mt Kenya, Africa’s second tallest mountain, and is an excellent place to locate many highland forest species. Along the entrance road we may encounter Augur Buzzard, Crowned Hawk-eagle, Hartlaub’s Turaco, Moustached Tinkerbird, Mosque Swallow, Black Saw-wing, Sharpe’s Starling, Black-tailed Oriole, Purple-throated Cuckoo-shrike, African Paradise-flycatcher, Cape Robin-chat, African Stonechat, Broad-ringed White-eye, and Eastern Double-collared Sunbird and if lucky enough the most rare and sort for Green Ibis. The forest bushes around the lodge is host to many mammals and we can expect Blue Sykes Monkey, White-tailed and Marsh Mongooses, Common Genet, Bushbuck, Giant Forest Hog, and the tiny Suni and occasional Forest elephants visit this resort. At an elevation of almost 8,000ft nights can be quite chilly. One night stay at the forest Lodge. 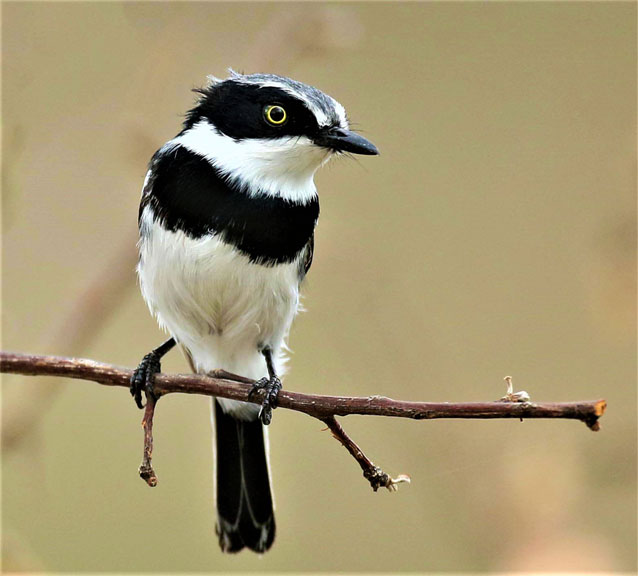 On our last morning in Samburu we will visit the nearby Buffalo Springs Game Reserve. The slightly different habitat is home to many specialties: Somali Ostrich, Lappet-faced Vulture, Rüppell’s Griffon- vulture, Eastern Chanting-goshawk, Pygmy Falcon, Cream-coloured (Somali) Courser, Chestnut-bellied Sandgrouse, White-headed Mousebird, Eastern Yellow-billed Hornbill, Nubian and Cardinal Woodpeckers, Fischer’s and Chestnut-headed Sparrow-larks, Yellow-vented Eremomela, Spotted Morning-thrush, Marico Sunbird, Taita Fiscal, Golden Palm Weaver, Black-capped Social Weaver and African Silverbill. We then have a mid-morning departure for the Naro Moro River Lodge located on the northern edge of Mt Kenya. En-route we will make a stop at the Meru Forest, where many unique species can be found. Much of the bird life here resembles the coastal avifauna of Kenya. Here we will search for White-eared Barbet, Yellow-bellied Greenbul, Black-headed Apalis, African Crested-flycatcher and Kenrick’s and Black-bellied Glossy-starlings. Our lodge is set in the perfect setting of highland forest, flowing brooks, and gorgeous flower filled grounds. The birding in this area is also very nice and we may see African Black Duck, Narina Trogon, Sulphur-breasted Bush-shrike, Tropical Boubou, Chin-spot Batis, African Black-headed Oriole, and Red-cheeked Cordon-bleu. One night stay at the Naro Moro River Lodge. Scarlet-chested Sunbird, Silvery-cheeked and Trumpeter Hornbills and Brown-hooded Kingfisher can all be seen here. 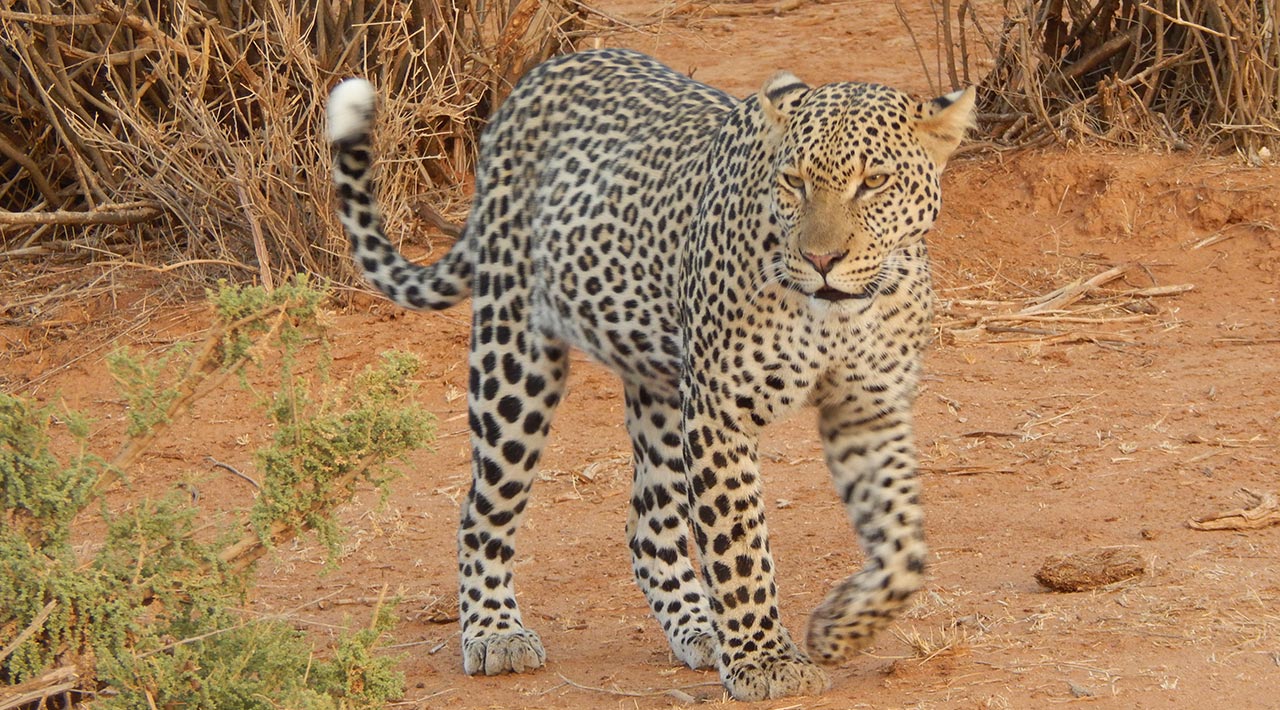 Leaving early we will make an ascent onto Mt Kenya entering the vast and pristine montane forest of Mt Kenya National Park. Making our way up the winding road to the Meteorological Station we will keep an eye out for such birds as African Goshawk, Mountain Buzzard, Rameron Pigeon, African Emerald Cuckoo, Red-fronted Parrot, White-headed Wood-hoopoe, Grey Cuckoo-shrike, Brown Woodland-warbler, Waller’s Starling, Abyssinian Crimson-wing and Black-headed Waxbill. Reaching 10,000 ft, birds more commonly seen at this higher altitude are Jackson’s Francolin, Abyssinian Ground-thrush, Olive Thrush, Cinnamon Bracken-warbler and Moorland Chat. We will be leaving mid-day and transferring to Lake Nakuru National Park allowing time to search for several key species along the way. A large rocky escarpment en-route is a favourite roosting spot for the Mackinder’s Eagle-owl and with some luck we should be able to locate this highly sought-after species. The Acacia scrub by a nearby lake is a favourite haunt for Little Grebe, Yellow-billed Duck, Red-winged Starling, Little Rock-thrush, Pale Flycatcher, and Purple Grenadier. In the afternoon we will arrive at Lake Nakuru National Park, which is called by some, the greatest birding spectacle on earth! Huge numbers of Lesser Flamingos feed in the shallow alkaline water, sometimes up to a million, with smaller numbers of Greater Flamingos. Exploring the Acacia woodland and the lakeside marshes we will no doubt encounter many wonderful avian delights: Great White Pelican, Great Cormorant, African Spoonbill, African Fish-eagle, African Harrier-hawk, Hildebrandt’s Francolin, Grey-headed Gull, Broad-billed Roller, Levaillant’s Cuckoo, White-browed Coucal, Green Wood-hoopoe, Rufous-necked Wryneck, Grey Woodpecker, Black Cuckoo-shrike, Northern Anteater-chat, Grey-backed Fiscal, Brown-crowned Tchagra and African Firefinch. Mammals are also quite common in the park and it is one of the few places in East Africa where the endangered White Rhino can be found. Some of the other mammals we hope to find include Rothchild’s Giraffe and Reedbuck. One night stay at the Lake Nakuru Sarova lion Hill Lodge.

Early morning we will depart for Kisumu on the northeastern shore of Lake Victoria where we will search for the specialties of the area, some of which are found only in the papyrus swamps surrounding this great lake. Species we are likely to see are African Openbill, Abdim’s Stork, Water Thick-knee, Long-toed Lapwing, Eastern Grey Plantain-eater, Blue-headed Coucal, Black-billed Barbet, Yellow-fronted Tinkerbird, Greater Swamp-warbler, Swamp Flycatcher, Birds to be Red-chested and Copper Sunbirds, Papyrus Gonolek, Slender-billed, Black-headed and Northern Brown-throated Weavers, Black-winged Bishop, Fan-tailed Widowbird and Papyrus Canary. From Lake Victoria we will proceed to the Masai Mara Game Reserve in south-western Kenya. The Mara is the northern extension of the famous Serengeti plains. Here we will find a wide assortment of bird life, as well as some of the most spectacular mammals on the continent. Complimenting the wildlife is the dramatic scenery of endless grasslands, lush river valleys, and steep rock strewn escarpments. Birds we can expect in this area of the Mara are Rufous-bellied Heron, Saddle-billed Stork, Wahlberg’s Eagle, Coqui and Red-necked Francolins, Grey Crowned-crane, Temminck’s Courser, Wattled Lapwing, Ross’ and Schalow’s Turaco, Malachite and Woodland Kingfishers, Yellow-throated Longclaw, Rufous-chested Swallow, White-tailed Lark, Familiar Chat, Silverbird, Red-faced, Trilling and Tabora Cisticolas, Green-capped Eremomela, Black-crowned Tchagra, Hildebrandt’s and Violet-backed Starlings, Yellow-fronted Canary and Cinnamon-breasted Bunting. This is the best area in the Mara to see big game up close and some of the many mammals to be seen here include Black-backed Jackal, Bat-eared Fox, Banded Mongoose, Spotted Hyena, Serval Cat, African Lion, Leopard, Cheetah, Bush Hyrax, African Elephant, Common Zebra, Hippopotamus, Common Warthog, Masai Giraffe, African Buffalo, Eland, Steinbuck, Bohor Reedbuck, Thomson’s and Grant’s Gazelles, Impala, Topi, Coke’s Hartebeest, and thousands of Wildebeest. We will also see many massive Nile Crocodiles, some over 15ft in length, basking in the sun along the banks of the Mara River. Two nights stay at the Mara, Mara Serena Lodge, Mara West or Kichwa Tembo .

Leaving early we will bird the Acacia woodland in the Siana Springs area of the southern Mara. This area is home to several species seen nowhere else in the country. Some of the specialties may include Bare-faced Go-away-bird, Magpie Shrike, Miombo Camaroptera, African Penduline-tit, Croaking Cisticola, Red-throated Tit, Red-headed Weaver, Black-throated Canary and Golden-breasted Bunting. Mid-morning we will depart for Lake Naivasha traveling through the Great Rift Valley. While en-route we may come across Egyptian Vulture, Greater Kestrel, Kori Bustard, Grey-rumped Swallow, Schalow’s and Capped Wheatears and Red-billed Quelea. An afternoon arrival will allow us to bird the tall Acacia woodland on the beautiful hotel grounds. expected here are Gabar Goshawk, Dideric and Black Cuckoos, Barn Owl, Verreaux’s Eagle-owl, White-fronted Bee-eater, Lesser and Wahlberg’s Honeyguide, Black-lored Babbler, Amethyst Sunbird, Grey-headed Bush-shrike and Spectacled Weaver. One night stay at the Lake Naivasha Country Club.

The morning will begin with an exciting boat trip on Lake Naivasha. Specialty birds we will be looking for while out on the lake include Pink-backed Pelican, Goliath and Purple Herons, Southern Pochard, African Marsh-harrier, Purple Swamphen, Lesser Moorhen, Three-banded Plover and Lesser Swamp-warbler. Mid-morning we will depart for Nairobi, making several birding stops en-route. Our first destination is the Kinangop Plateau where we hope to find the endemic Sharpe’s Pipit. This species has been on the decline in the last few years, mainly due to habitat loss, but with some luck we’ll be able to locate this very special bird. Next will be the Gatamaiyu Forest on the Kikuyu Escarpment, an area of middle-elevation forest, which is home to several species not yet seen on the tour. The main target birds in this area are Cameroon Scrub-warbler, White-tailed Crested-flycatcher, Placid Greenbul, Black-fronted Bush-shrike and the nomadic Abbott’s Starling. Our final birding stop is at the Limuru Pond located just off the main highway. A large ridge overlooks the pond and from this vantage point we should be able to locate Madagascar Pond-heron, Intermediate Egret, White-backed and Maccoa Ducks, White-faced and Fulvous Whistling-ducks, Black Crake and Whiskered Tern. One night stay at the Nairobi Safari Club.

We will spend our last day in Kenya birding Nairobi National Park, which lies within the shadows of the large capital city. With highland forest, Acacia woodland, rocky escarpments, open grassland, large ponds, and small streams, this park is home to a wide variety of birds and mammals. Some of the key species we will search for here are Shelley’s Francolin, Hartlaub’s Bustard, Spotted Thick-knee, Yellow-throated Sandgrouse, Singing Cisticola, Banded and Brown Warblers, African Yellow Warbler, Northern Pied Babbler, White-breasted White-eye, Long-tailed Fiscal, and White-winged Widowbird. Nairobi National Park is without a doubt the best place in Kenya to see the endangered Black Rhino, and we have a very good chance of locating this very impressive species together with many of the other mammals we have seen before. Afternoon departure from Nairobi. 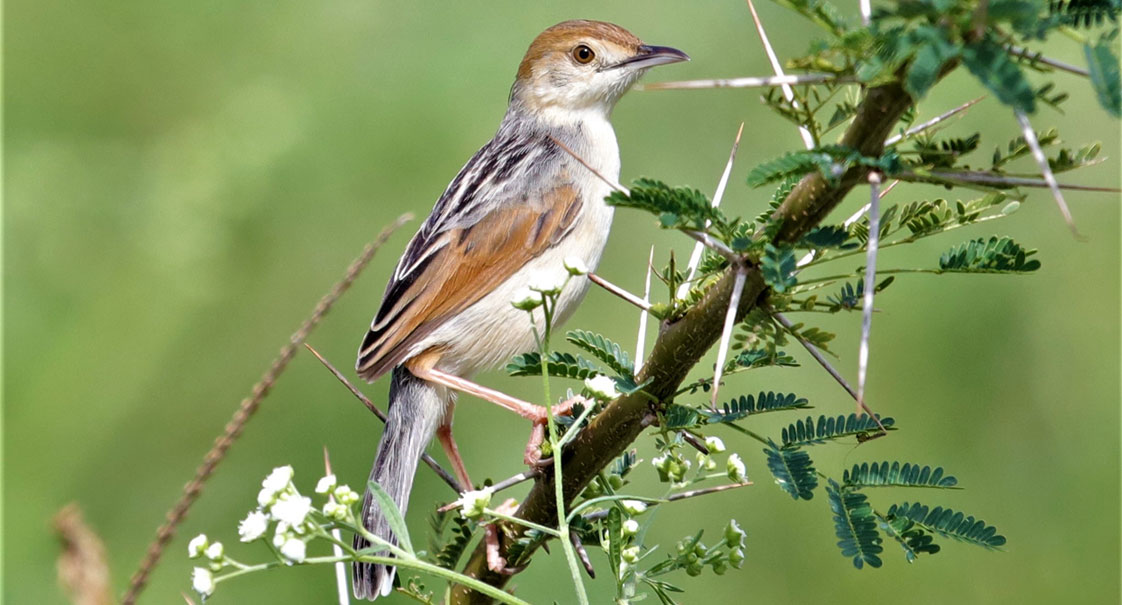 Arrival back in Europe at the end of the tour (Just our guideline on your days but does not include any international flight ticket).

General Information: The climate is generally hot. Accommodation standards are good with en-suite in all rooms. Food is of European standard. Transport is by minibus or four-wheel drive and the road conditions are reasonable. There are special health requirements. Visas are required and cost either £35 in advance or $50 in Kenya. Only a moderate degree of fitness is needed. Photographic opportunities are excellent.

Excluded are insurance, alcoholic drinks, International return ticket, Tips/Gratitude to the driver/Guide and items of a purely personal nature. 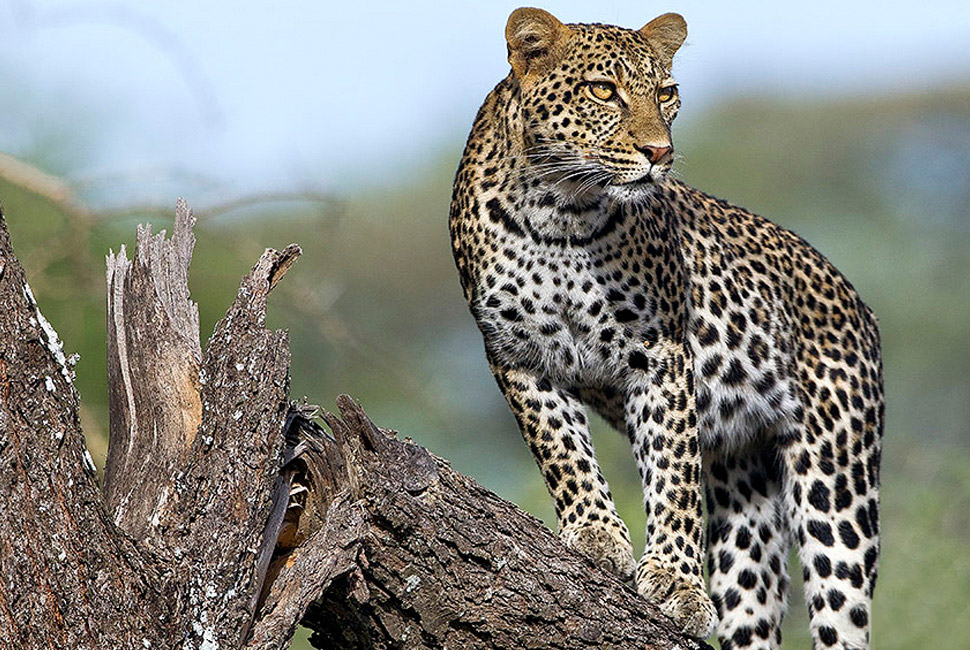 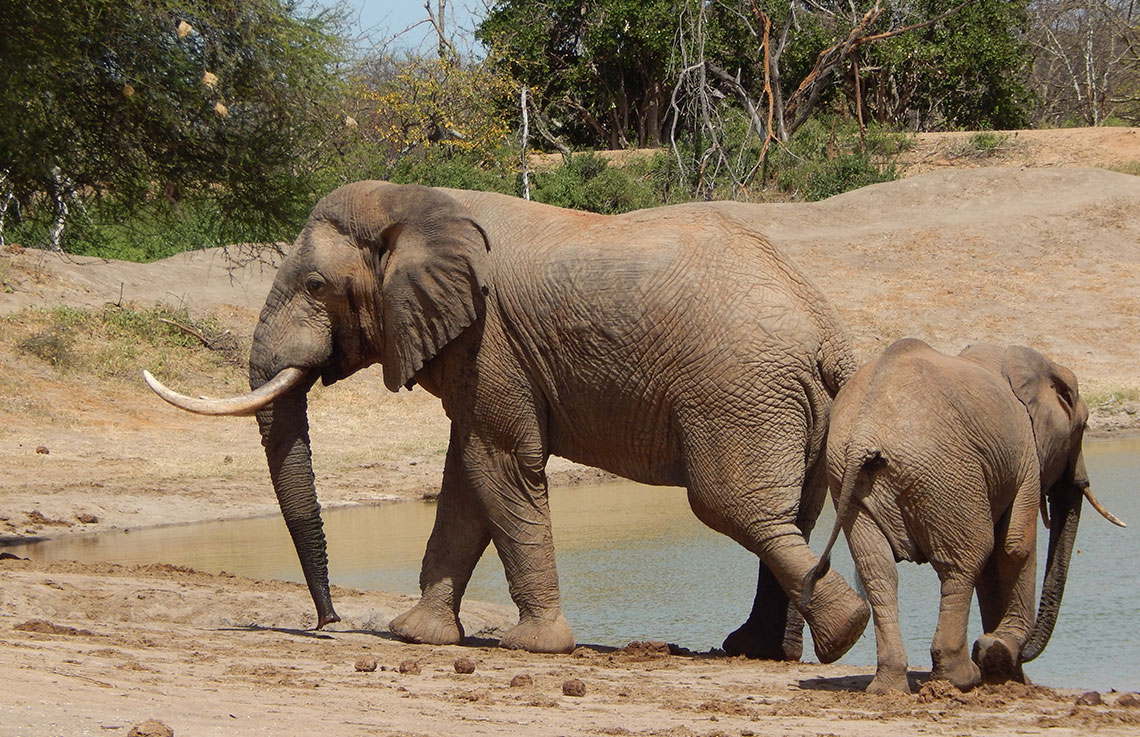 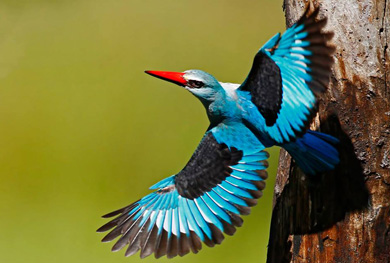