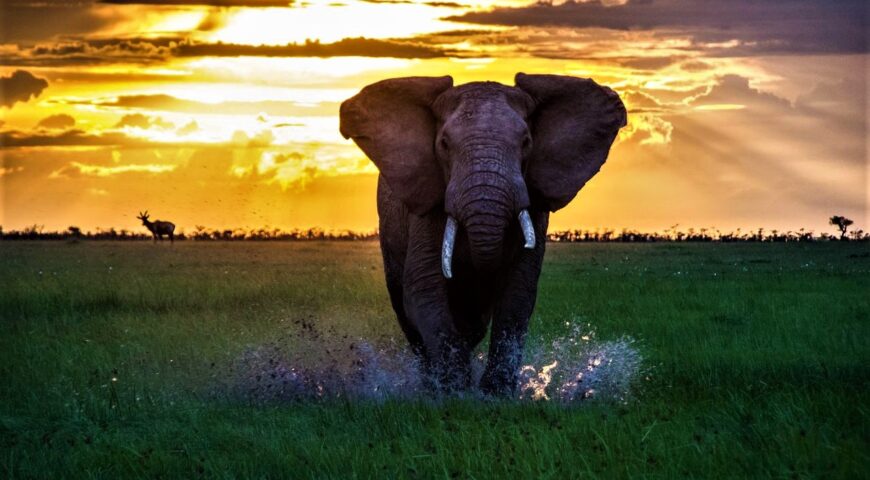 Elephants are highly intelligent animals whose continued existence is threatened. Loss of habitat, human-elephant conflict, and poaching for ivory and bushmeat are great threats to elephant populations. As of 2013, the Asian elephant population had experienced a 90 percent decline in the past 100 years and some experts suggest 95 percent of their original habitat has been lost over the same period. Today there are thought to be between 300,000 and 500,000 wild elephants in Africa and less than 60,000 wild elephants in Asia. Asian elephants are recognized as an endangered species. African elephants are recognized as threatened. #travelphotography #wildlifephotography #safaris #nature #naturesthroughthelense #photo #photooftheday #africanelephants #exclusive_wildlife #bestnatureshots #safari #featured_wildlife #wildlifeofinstagram #allnatureshots #travel #africa#wildlifeperfection #natgeo #natgeotravel #natgeowild #elephants #naturelovers #natureofgallery #animallovers #wildlifeplanet #africanamazing #photoarena_nature #wildlife #travelinspiration for more information you can inquire at info@www.natureswonderlandsafaris.com or visit our website www.natureswonderlandsafaris.com

Interesting facts about African Elephants.
. Baby elephants stay with mum for up to 10 years. They even learn to eat by putting their trunks inside their mothers’ mouths to take food.

. The average life span of an elephant is 50-70 years, the same as humans, but the oldest known elephant in the world was 86 when he died.

. Elephant family groups are very close. While they can’t exactly hug each other, elephants do wrap their trunks around younger relatives to reassure them, and to greet each other they twine their trunks together.

. Elephants walk at about 4mph, and they are able to swim long distances.

.They are, however, the only mammal that can’t jump. How fast can elephants run? Elephants have been clocked to run at 15 mph, however it is believed that, over a very short distance, elephants could run as fast as 25mph.

. Elephants consume 200kg of food and 200 gallons of water every day.

. Their Digestion system is very poor hence digesting 30 to 40 percent of food they consume daily.

. The shortest trunk in an elephant show they are either left or right-handed
Elephants bury their dead colleagues by covering them with trunks, branches, and leave, and they mourn just like humans.

. They have very sharp memories. They can remember something 10yrs later without getting lost.

. Their trunks are believed to have more than 100,000 nerves, which means they can even pick a very small object size of a thorn or grass with their trunk.
. Elephants have very poor eyesight

. Elephants have a very high sense of smell and hearing

. From reports, Elephants have in recent years generated a resistant gene to not grow tusks, maybe due to the intense poaching being witnessed in Africa.