BRIEF QUALIFICATION OF THE GUIDES

Our guides are considered to be a cornerstone of Nature’s Wonderland Safaris. It is with this in mind that we scout all over Kenya in search of the most friendly, personable and highly knowledgeable individuals available. 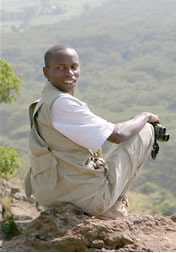 JOSEPH is our senior ornithological safari guide and his vast experience of 11 years in field guiding has been a great input in our company, as many of the client(s) who have gone safari with him, always have introduced a new friend to us if not a group of birders.

Born at Central province of Kenya, JOSEPH’s interest in birding came way back in 1992-1995 as hidden talent when he was in secondary school. This saw Joseph emerging with a Geographical Club which he chaired as the chairman and later joined tourism college, these saw him grow gradually with the interest of birding and later joined Nature Kenya, a society that back here in Kenya deals with the matters pertaining with Birds, Flowers, Plants, Entomology and in general the conservation of Nature.

He has also been a member of the Kenya Professional Safari Guides Association (KPSGA) and holds a Bronze Medal. His endless effort has been great such that, he is never late with activities concerning birding in and around the world. For he has been a great volunteer with the department of ornithology here in Kenya. Due to this, Joseph is always at the forefront during the annual African Water bird census that is conducted every January of the year and not to mention the Bi-annual World bird watch. Apart from that Joseph has been a tour leader with most of the leading tour operators and among the many prominent birders that he has gone safari with is Mr & Mrs Andre’ Konter, a research scientist and a writer of the book THE GREBES OF OUR WORLD a lynx edition.

His birding safaris have been commendable with the growing list of the clients who have done safari with him. 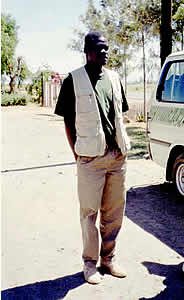 NICODEMUS nicknamed by our birding clients “NICO” has been role model to many of our birding as well as the wildlife safari guides. Due to his avid birding and research work in the field, has earned him great respect with many birders all over the world, and in return to his service many of the birding clients have offered him travel package on birding research to many countries just to mention United Kingdom, Hungary.

Born in 1977 in Western province (on the slopes of Mt. Elgon) he grew up with an interest in Natural History, this lived on and to his surprise found himself working in the same environment at the National museums of Kenya – Nairobi. He has had a passion for birds since his early child hood, and again not bragging he currently work in the department of ornithology based at the Museum as a research technician. During his early years working as an intern in the Ornithology Department he indeed gained a wide knowledge in Afro tropical ornithology covering both aquatic and terrestrial habitats in Eastern Africa, and Kenya in particular, He too visited several European countries to booster his ornithological skills.

His key responsibilities in the department have been logistical co-ordination of research expeditions (often involving volunteers and tourists), and information and records’ management for birds.

BELOW ARE OUR LOCAL GUIDES at Arabuko Sokoke Forest

We Regret to announce the Demise of our ground bird guide assistant David Ngala yesterday 7/6/2022 through a road accident on his motorbike where he sustained head injuries May the Lord Rest his Soul in Peace!! We loved you Brother but Lord loved you Most!! David was the first bird Guide in Arabuko-Sokoke and is known internationally for his passion for the forest and his intimate knowledge of its birds and the traditional uses of many of its 600-odd plant species.

He started guiding in 1983 in his spare time and has also led tours in other parts of Kenya and as far afield as Uganda and Tanzania. He is a member of the Friends of Arabuko-Sokoke Forest committee and an avid conservationist. He is also a notorious story-teller.

Willy is involved in regular monitoring and research activities in Arabuko-Sokoke Forest having assisted particularly in projects on the Sokoke Scops Owl, Amani Sunbird, Sokoke Pipit and Golden-rumped Elephant Shrew.

Albert Baya has been guiding in Arabuko-Sokoke Forest since 1996 and specialises in birds and plants. He is one of the few people able to find the Sokoke Scops Owl at its daytime roost and is involved in regular bird monitoring activities.

Coming from a family background rich in local Giriama traditions, he is extremely knowledgeable in the tribal culture. Albert is also conversant in the German language.